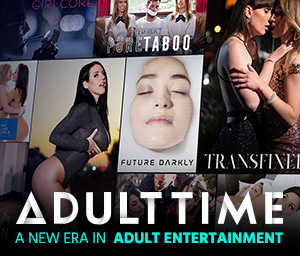 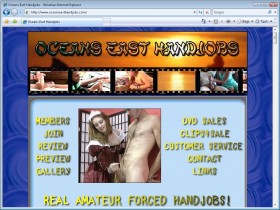 Oceans East Handjobs is a Canadian site focusing on handjobs, mostly of the clothed female naked male variety; allegedly, this site is supposed to have an oriental theme, but there isn’t a single Asian girl to be found anywhere on Oceans East Handjobs. Oops!

Aesthetically speaking, Ocean East Handjobs ain’t so easy on the eyes; in fact, the design of the site is downright ugly, not unlike the person presently reviewing this site (me). The site looks amateurish due to its overall crummy design, but I guess that’s the point; I mean, this is an amateur site after all. Thankfully, navigation is very straightforward, thus the site is easy to use despite being so darn ugly. This means there are no advanced navigation options like tags, model index, etc. either. The main members area displays a list of videos on the site (there are no photos on this site, just videos). Each of these episodes has an animated series of screen captures set against a pale blue background and a block of simple black text written below each scene that briefly describes all the action, thus allowing members to get a taste of what they will see should they choose to download the videos.

Currently, there are four hundred and one scenes on Oceans East Handjobs. Clips aren’t very long, only lasting three to twelve minutes (I’d say six minutes is the average length of a movie on this site), with much of that time being devoted to setting up the premise of the video (you know, so-and-so is a policewoman who needs to get a sperm sample from some guy…). Each video can be downloaded in average-quality Windows Media (640x480; 1372k). The quality of the videos isn’t that great — its average at best. Videos have no download limits, though the webmasters do ask members to limit their downloading to that of one video at a time in order not to slow down the site for other users. It really doesn’t matter cos this site is slow as molasses no matter what! Seriously, this might be the slowest site I’ve ever reviewed… downloading a clip is pure agony! And the clips are short! Argh!

Regardless of wait time, lack of exclusive content and primitive graphic design, I love Oceans East Handjobs. The content is truly fascinating and, better still, most of it's pretty hot. The amateur women in these videos are relatively attractive (the men they jack off, on the other hand, pun intended, are fairly hideous). The makers of this site are extremely creative. The gals often wear uniforms or costumes (you’ll see plenty of Hooters waitresses, maids, cops, nurses and super heroines handing out handies on this site) and there’s a good deal of femdom play as well. You’ll also see multiple women handle single men and even contests in which the women do their darnedest to shoot the guys’ loads the farthest. Hot stuff!

Oddly enough, most if not all of the clips are watermarked with the URL www.JerkyGirls.com; further investigation has revealed that all of the content is licensed from third-party sources (“we are a secondary producer of this content… we have received this content from the original source, but have not filmed or paid for the production of the content,” or so says the webmasters at the bottom of certain pages of the members area, though much of it does appear to be Canadian in origin! So Oceans East Handjobs buys its content from Jerky Girls and other sites. I looked at Jerky Girls and it’s a site which sells six-minute clips for six bucks a pop; clearly, a membership to Oceans East Handjobs is a much better value than buying all these clips separately… No idea how often Oceans East Handjobs is updated, but I would guess it’s updated whenever Jerky Girls has something new on its hands. Let’s say once or twice a week. 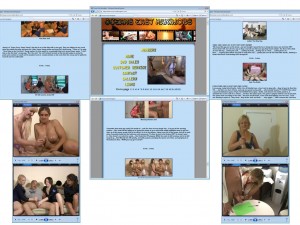